Jim Slater was undoubtedly the wiz kid of his generation. The legendary British financier, who died in November 2015, aged 86, had the knack of making money on the stock market like no one before or since. He became known as a ruthless asset stripper, whereas his first love was stock-picking, an activity that remained with him long after his Slater Walker Investment vehicle came unstuck following the 1973 oil crisis, which in his own words left him ‘a minus millionaire’. But his reputation for picking winners was so well established that he not only survived but his magic made him richer than he ever was before. 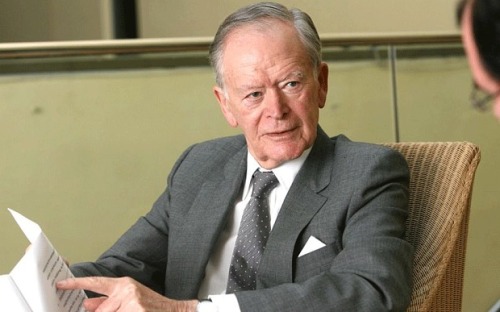 I first became involved with Jim Slater in 1967 when he was at the height of his notoriety as a new breed of business magnate who had not originated within the establishment. An enigmatic figure, he pushed against the boundaries of recognized practice. He headed a burgeoning City conglomerate, Slater Walker, which was already the subject of controversy in the financial world on account of its boldness of approach and its swift rise to prominence. Slater Walker’s methods could be contentious and questionable at times, but they were always dynamic in practice and forward-looking in concept.

I got an introduction to the company through a chance meeting with Jonathan Aitken at a cocktail party. Jonathan was Jim’s acting personal assistant at the time, and as a result of our conversation Jonathan suggested I might consider taking on a consultancy for Slater Walker. The brief would be for an arrangement similar to the one I had at that time with Asprey, the legendary Bond Street jewellers.

Jonathan needed a contact that would help him become familiarized with conditions in the Gulf States and to find him introductions to potential clients in the emirates. The objective would be to tap the rich resources of the oil-producing states for investments in Slater Walker’s various projects. The appointment was ratified purely on Jonathan Aitken’s recommendation. I met no other members of the company, not even the great man himself. Mr Slater, I was given to understand, was something of a recluse who preferred to remain in his corporate ivory tower, scarcely accessible to anyone outside his inner circle.

A crisis point came after our arrangement had been in force for only two months. During a trip I was making with Jonathan Aitken and two young Slater Walker executives, though Jonathan was full of charm, the two young men adopted an arrogant and patronizing attitude, treating me as if I was an employee rather than their consultant. Tensions escalated into an argument that only just avoided turning into an ugly scene. As a result the trip was an abortive venture which had nothing positive to show at the end of it.

When I received a phone call later when I was back in London, from Jim Slater’s personal secretary inviting me to tea with him the next day, I expected the worst but felt neither anxious nor dispirited; it was just a question of confronting the inevitable. As I waited outside the chief executive’s office I expected to be met by a personal assistant, but found it was Jim Slater himself who came to the door to ask whether I had eaten anything at lunch that had garlic in it before he would let me cross the threshold. It was only after he had been assured that my last meal was garlic free that he welcomed me into his office.

It seemed the most bizarre preamble to any meeting I could remember but Jim set the conversation rolling by explaining that the smell of garlic was totally abhorrent to him. He was sorry he’d had to broach the subject, he said, but it practically made him sick and left him ill at ease. With the issue of garlic out of the way, we settled down to a general chit-chat that had nothing to do with any inquest into the Kuwait fiasco. In fact the subject was never mentioned; instead he said how happy he was to hear that Jonathan Aitken and I were working so well together. He had high hopes that our team efforts would soon reap some good results. As he struck this positive note in the conversation, he pressed a bell hidden beneath his desk. The company secretary duly obeyed the summons to appear and Jim asked him how much I was being paid annually for my services. When the secretary said it was five thousand pounds, Jim retorted that it should be double the amount. The secretary was sent away with instructions to mark the books accordingly.

I had come to see Jim Slater, convinced that my brief involvement with Slater Walker was at an end. On the contrary, my salary had doubled at a stroke and from that time on I would have personal access to Jim Slater whenever it was necessary. Most importantly, it turned out to be a major turning point in my career. He became the sort of godfather I never had.

More importantly, I was to learn a great deal during this whole remarkable period in my life. Jim Slater was charismatic and money driven, and had money-making in his bloodstream. It was as if he could have attained orgasm through the manipulation of money, unlike ordinary people, who seek their gratification through more commonplace activities. He belonged to that breed of men who are the cornerstone of capitalism. Without them, the progress of economies would come to a standstill, for they fuel the dynamo that creates their momentum.