George Zakhem’s book, Men Who Dream Can Do, continues to receive international acclaim from those who read it.

It goes to prove that biographies of successful men written with honesty and great sensitivity never fail to attract the attention that their colourful lives duly deserve.

No hype is needed in their particular case. Quality speaks for itself.

‘It is a fascinating story of your career and endeavours from a modest start to founding and heading a successful international company. It brought back memories of familiar persons and places and similarities of my own career, with the great difference that you have dared and done. Your description of your childhood in Lebanon reminded me of Late Professor Edward Saeed (whom I knew and greatly admired) and brought tears to my eyes, and your philanthropy and generosity greatly touched my heart.’ – Shoaib Ghaffar, CEO – OGIS UK

Comments Off on George Zakhem 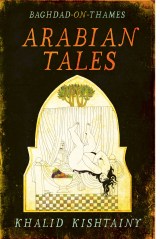 Arabian Tales by Khalid Kishtainy is a book that transforms eroticism to a humorous level hitherto unprecedented.

You will be amused, occasionally turned on, but always entertained.

The author is a man who goes to bring a handful of soil from his motherland; a boy who defies authority to eat an orange with his mother; how dogs and cats caused chaos with the Arab/Israeli conflict; the consequences of a perfumed handkerchief discovered in the underpants of a business executive; the cost of old sins.

At £15 this book in hardback is a real treasure trough.

Comments Off on Khalid Kishtainy

Tessa Dunlop’s book, To Romania With Love, is getting wonderful exposure.

It’s a love story with a difference, which should appeal to the large majority of people who believe that true love transcends conventional obstacles seemingly unbridgeable.

Buy a copy of the book and relish a moving story, with a happy and glorious ending.

Comments Off on Tessa Dunlop

In Conversation with Brian Sewell 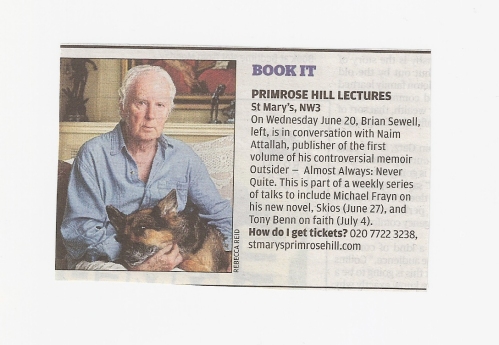 Comments Off on In Conversation with Brian Sewell

Men Who Dream Can Do…

The Italian diplomat Sebastiano Salvatori had this to say about George Zakhem’s memoir:

‘Fascinating. No better title you could have chosen to describe the very essence of your personality: “Men who dream can do…” Beautiful words which remind me of another great visionary, Martin Luther King: “I have a dream…” But you are not only a visionary. For me you can also be defined as a “renaissance man”; a great man mastering all aspects of human expertise, and extremely sensitive towards culture and solidarity initiatives. That’s why you really deserve this appellative.’

Read my own take on the book here.

Comments Off on Men Who Dream Can Do…

Chelsea Wives and their Mistresses

My speech from last night’s launch party for Chelsea Wives and their Mistresses at Jean Paul Gaultier, South Kensington.

We are here to celebrate the publication of Sarah Bramley’s debut novel, and it is certainly a novel with an intriguing title: Chelsea Wives and their Mistresses.   I hope it stirs curiosity as well as a frisson of scandal, or even a little outrage among the purists in our society.

As the publisher of the book, I am in no doubt that Sarah’s honesty and courage in tantalising us with her hints of a close approximation between herself and one of her main characters, so intertwining the fictional side with autobiographical digression, will add a special incentive for the reading public to acquire the book.

Surely she must have been inspired by the old sixteenth-century saying, ‘Tell the truth and shame the Devil!’ What does this indicate to us about the author? That she has the chutzpah and the determination to make her mark as a good story-teller without deferring to the hypocritical restraints of our so-called respectable establishment. 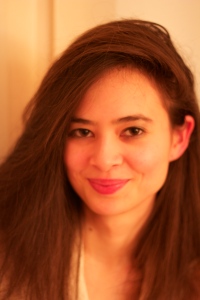 Quartet was obviously the appropriate venue for her to approach in looking for a publisher. She did this with a degree of panache, delivering the manuscript in person to the offices in Goodge Street, clad for the purpose in an outfit that complemented her effervescent personality.

The manuscript was immediately dispatched to my private office in Shepherd Market for perusal and a decision. I read it through over the weekend and felt that, with a little editorial guidance, her story would be one well worth publishing. The impression was reinforced when I met her for the first time. My instinct was that here was someone who was certainly promotable. And I was certainly right.

Let’s hope now that Sarah achieves the success she so earnestly seeks in her story of the limitations and alternatives of passionate involvement. And that her many friends see the potential of her talent starting to blossom from deep within the boundaries of her aura.

Above all, I urge them to support her in the best way possible by buying copies of her book and to spread the word-of-mouth recommendation, in ever-widening circles, that she has written something to engage the lively attention of every enlightened reader.

My message is pure and simple: dig deep in your pockets and show us that you care, for Sarah is a loveable new author who I am sure will not let us down.

My speech from the launch of Alex Williams: The Survival of an Artist, which took place at The Idler last night. 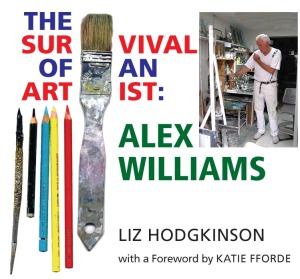 Artists and the art works they create have been a source of fascination for me ever since my early childhood. My father was a humble bank official whose interests in life were rather few and uninspiring in general, but conversely he developed a mania for collecting paintings and other objects of vertu. He did this, I may add, out of very limited financial resources.

Consequently I grew up in an environment that became the trigger for setting me off into becoming an art collector myself, and taking up work within a parallel medium that embraced the luxury goods market on an international scale with an appreciation of all levels of fine craftsmanship that this implied.

So, in my other function as a publisher, I feel it is natural for me to present the life and work of an artist of the calibre of Alex Williams in book form.

It will certainly give me great pleasure if, in the role of publisher, I can be a kind of bridge between the artist and the wider public who may not be fully conversant with the immense contribution he has made to the world of modern paintings.

Art itself is bound to be a reflection of the artist, of his life and of his struggles to attain recognition. These aspects are as relevant today as they have ever been.   Modern technology has changed a great deal in our society and made it so much more difficult for the gifted person to sustain the creative edge of his or her endeavours and development.

Alex Williams is an artist with a uniqueness that lets him inhabit his own space, unafraid to move forward with his projects and willing to take risks and change working environments in pursuit of his art. On a personal level, his bonhomie and flexibility are infectious and make him charming company.

He has achieved that rare accolade of being a painter whose commercial success has not compromised his reputation as one of the significant artists of the present age. On the one hand, his cards and pottery reproductions have made him a top-selling graphic designer in National Trust gift shops all over the United Kingdom. On the other, his original paintings are recognised as highly desirable by collectors and respected by critical opinion.

Alex’s road has not been an easy one. His life has not been without its problems and heartbreak. To bring his work to where it is today has required a steely determination to succeed over many obstacles where others might have failed or abandoned the fight.

Liz Hodgkinson, the well-known Daily Mail journalist, has written an absorbing text to accompany the colour illustrations, and makes this a production that transcends the usual kind of illustrated art book. The picture selection is profuse, generous and illuminating.

The Survival of an Artist traces the early influences on his work, from the serene river banks and cottages of East Anglia, where he grew up, to the explosive impact of pop art that greeted him as a first-year student at St Martin’s in the early 1960s.

Now he stands as a much-desired artist both here and in the United States, where he lived for many years. However, he continues to develop his art, with no sign of his creative impulses falling into stagnation.

Alex Williams is a man to admire, and we are gathered here today to celebrate the man and his art. What better praise and acknowledgement can we heap on him than to buy copies of his book to mark a culmination of his well-deserved success?

Comments Off on Alex Williams