A RUMBLE FROM THE JUNGLE 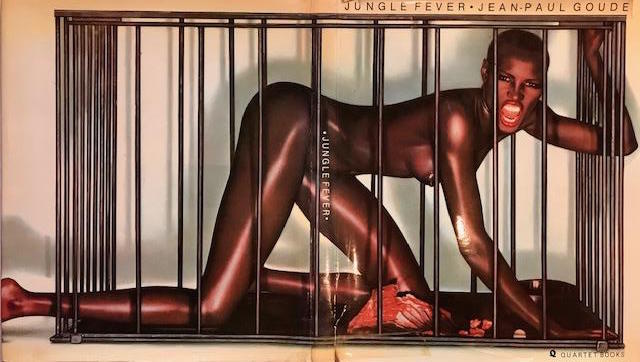 Of the many photographic books I published, Jungle Fever retains a special place in my heart. Its publication in 1982 precipitated a whirlwind of controversy. The first published collection of photographs by Jean Paul Goude, then unknown to most Englishmen (and women come to that), its cover featured a naked Grace Jones (also then unknown in this country) as a caged creature, her sharp glistening teeth eager for the kill. Across the top of the cage was a notice that read: ‘Do not feed the animal’.

The feminist lobby condemned it as the most humiliating and demeaning portrayal of a woman ever published. It could perhaps also have been said to be the most extraordinary portrait ever of a woman by her lover; the artist asserted that it was he who had caged the beast. Some years later Jean-Paul was quoted as saying of their relationship, ‘I was Svengali to Grace’s talent. As long as I seduced her, and she was in love or infatuated with me, I could do anything I wanted with her creatively, because I was constantly admiring and paying tribute to her. It all ended dramatically when she felt I had started to love the character we had created more than I loved her.’

They remained friends, but he regretted the way the relationship had, in his view, ended prematurely, the crunch having come when Grace read the chapter he wrote about her in Jungle Fever. She was ‘so angry and felt so betrayed that we couldn’t go on. Creatively, it was just impossible.’

Jungle Fever was a dazzling trawl through the international underworld of beauty, humour and eroticism. Jean-Paul Goude, the uninhibited graphic genius behind the manipulated images, was once aptly described by Esquire magazine as ‘The French Correction’. Through his surrealist-influenced techniques, placed at the service of high-profile advertising campaigns, the public probably became more aware of his work than of his name. In many ways, he was always ahead of his time, going beyond kitsch to produce new configurations of images to stretch the imagination afresh.

His aim was to make nature conform to his fantasies, as the collection in the book illustrated. Besides Grace Jones, it included Kellie the Evangelist Stripper, Sabu, Gene Kelly, Zouzou, Little Beaver, Judith Jamison, Russ Tamblyn, Toukie, Radiah, the Sex Circus of Eighth Avenue and the nocturnal flore et faune of 42nd Street. The only thing these disparate fantasies had in common was Jean-Paul Goude, but even so, as the blurb explained, they formed ‘a very special community: they have been made perfect to fit the world as Goude wants it to be – there are stilts for Radiah, a new ass for Toukie, a crew cut for Grace Jones’. To give an adequate account of Goude’s artistic range, his ‘work must be considered that of a painter, photographer, sculptor, musician, dancer, couturier, stage director and set designer – all of these and none of them. “To say the truth,” Goude says, “I see myself as an artist who uses the best means available to get a point across. What comes first is the necessity to communicate ‘my world’. Through the use of different media, I am able to show what to me is important.”’ He scornfully dismissed a plastic surgeon who refused to follow his design for a girlfriend’s new nose. ‘“After all, I am an artist,” Goude says. “What does he know?”’

It was the ultimate effect that concerned him: ‘the extension of a limb, the padding of a flank, a nip here and a tuck there – and suddenly the fantastic people and places of Jean-Paul Goude have become his forever and hopefully the reader’s too’. Jungle Fever sold extremely well, and was destined to become a collector’s item. Copies can now sell for hundreds of pounds on the Internet.

One response to “A RUMBLE FROM THE JUNGLE”